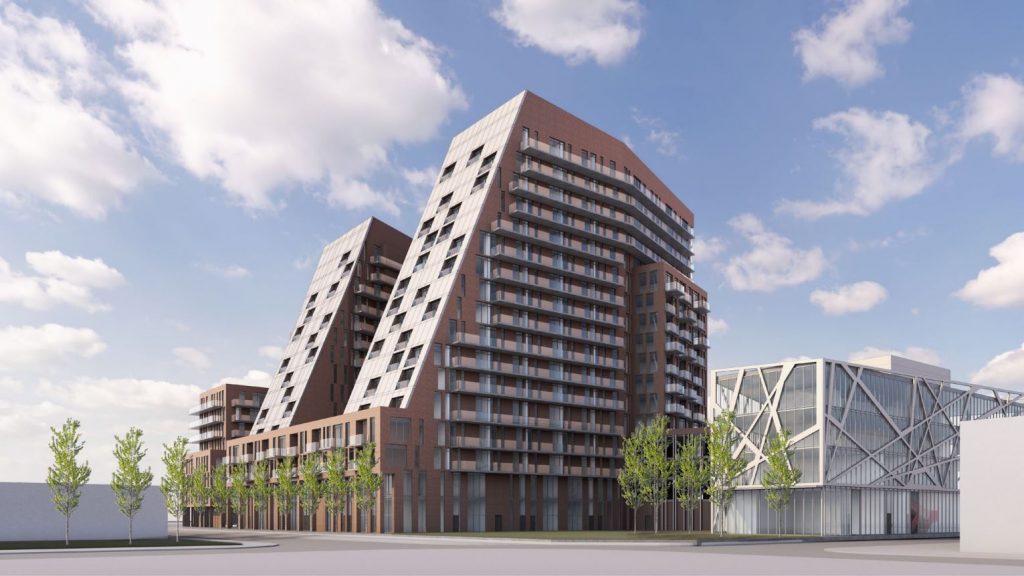 Rendering of Carlyle Junction, image via submission to the City of Toronto

Revisions to the massing of the two-volume residential component, and a reduction in height of the office portion, were outlined in our previous article. The latest submission of materials includes an updated rendering of the development and a massing diagram highlighting the changes from the 2019 version.

Massing revisions, image via submission to the City of Toronto

Stepbacks proposed on the north residential building have been simplified to provide additional sunlight on the north sidewalk. An eight-storey podium now steps up to 13 storeys, which is attached to the main 16-storey sloping element. The 18-storey volume to the south employs the same dramatic angular facade. The frontage on Mulock Avenue boasts a continuous four-storey street wall with street-facing townhouse units.

Angular plane from neighbourhood edge at Mullock and Lloyd, image via submission to the City of Toronto

The site would contain a total of 512 new residential units—including 37 affordable units—the 3,258 m² office component, and 2,035 m² of commercial retail space. A total of 335 vehicular parking spaces are proposed above grade along the rail corridor, serving as a noise and crash wall.

Angular plane from property line at St. Clair West, image via submission to the City of Toronto

Section 37 benefits include the affordable housing component, a public daycare, and the public park at the southwest corner of the property, which in the original application exceeded parkland dedication requirements, with the extra land now being redeployed to create a larger outdoor play space for the daycare. A proposed public connection between Mulock and St. Clair will now be designated exclusively for private use as a larger public stair and ramp connection is already envisioned on the west side of Mulcock under the City’s St. Clair Transit Master Plan.

Additional information and images can be found in our Database file for the project, linked below. Want to get involved in the discussion? Check out the associated Forum thread, or leave a comment in the field below.